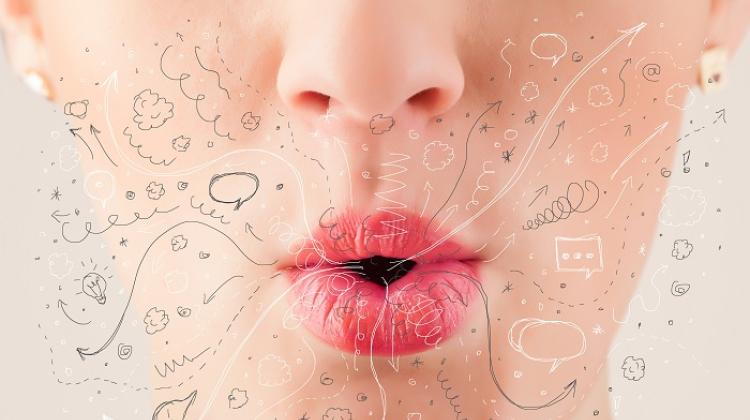 For long-term language development of infants, looking at the eyes and increasing focus on the talking lips are important, say researchers.

Girls look at both the lips and the eyes of the talking person, which may explain why at the age of two they say more words than boys.

Scientists from the Infant Psychology Laboratory BabyLab of the Polish Academy of Sciences in collaboration with Dr. Itziar Lozano investigated how looking at speaking faces affects language learning. The research results were published in the journal Infancy (https://doi.org/10.1111/infa.12496).

As part of the BabyLab's 'Talking Heads' project, more than a hundred toddlers with parents were invited to participate in the study. The children were brought three times - at the age of 5, 11 and 24 months.

“During the first two visits, babies performed an eye-tracking task, in which they watched +talking heads+. We measured their visual attention, and more specifically how much time they spent looking at the lips and the eyes of the speaking actresses,” says Dr. Klaudia Modlińska, a professor at the Institute of Psychology of the Polish Academy of Sciences. At the age of two, their language abilities were measured to see if the amount of time spent looking at the lips by toddlers was associated with subsequent speech development.

The authors of the project were the first to longitudinally test the development of focus on the lips - which means that the individual development of the same children was monitored for 18 months.

In the second half of the first year of life, the amount of time that babies spend looking at the lips of the speaking faces increases. “Babies with a greater increase in focus on the lips between 5th and 11th month showed better language skills at the age of 2,” say the scientists from BabyLab.

“Babies gradually learn to direct their visual attention to collect key information from people around them. First, at about five months, they focus on the eyes in search of communication clues (looks), and then at about 11 months they observe the movements of the mouth to get information on how to produce speech sounds,” the scientists say.

The researchers assumed that a greater preference for lips at the age of 11 months would be positively correlated with language skills at the age of both 11 and 24 months. But, they say: “The results have shown that this development process is more complicated.

Therefore, they have shown that both looking at the eyes (at the age of five months) and increasing attention to talking lips (between five and 11 months) is important for long-term language development. “More importantly, the effect of these developmental changes was not visible immediately, but delayed - visible only in two-year-olds,” the researchers add.

Girls 'scan' both the eyes and the lips of the speaker.

The scientists obtained interesting results by comparing the differences between girls and boys looking at 'talking heads'. It turned out that girls in the first year of life look at the lips more than boys.

Dr. Klaudia Modlińska says: “What's more, they use a unique strategy of looking at 'talking heads': they scan both eyes and lips at the same time, which seems to be a very effective skill, because it allows to capture both the emotional and language information from the speaker.

Scientists showed this difference many years ago, but the causes remained unclear until now.

The BabyLab team's study indicates the differences between sexes with regard to face scanning strategy and potentially different development paths of boys and girls in this area, which translates into a child's speech at the age of two years.

Scientists at the Infant Psychology Laboratory BabyLab of the Polish Academy of Sciences conduct research on various aspects of the development of infants and young children - cognitive, emotional and social. Their goal is to better understand how each child creates their own unique path of development. The researchers use a variety of research methods, such as eye tracking, EEG, fNIRS and behavioural and questionnaire measures.

The 'Talking Heads' project was financed by the National Science Centre grant and Marie Curie Career Integration Grant, the manager is Przemysław Tomalski.