History & Culture
This text can be copied
Ludwika Tomala 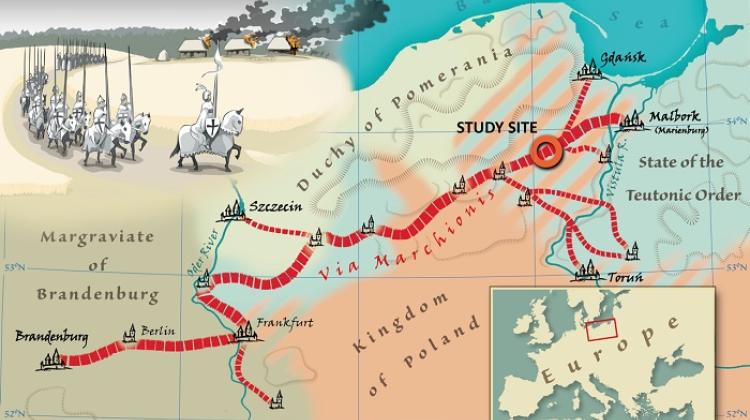 Location of the trade route via Marchionis

Scientists in Poland have unearthed the secrets of a medieval trade route after analysing sediments in a lake.

The team from the Institute of Geography and Spatial Organization PAS, took samples of well-preserved sediment core from the Czechowskie lake (in the Tuchola Forest, near Iwiczna).

This proved to be a very accurate archive of how the natural landscape was changing hundreds, even thousands of years ago. The sediment layers contain not only plant pollen, but also charcoal that testifies to fires and tells a story about changes in vegetation.

As a result, they found that when the human population in the area decreased as a result of war, plague, or raids, wild nature would quickly return to places previously used as crop fields.

From this they deduced that human tragedies enabling the return of the forest were related to the presence of a medieval migration and trade route via Marchionis, a fragment of an important medieval trail that connected Brandenburg with Marienburg, Danzig and Königsberg.

The scientists then compared the information with more traditional historical sources and rewrite the history of the Tuchola Forest and via Marchionis.

First author of the paper published in Scientific Reports, Dr. Michał Słowiński, said the study offers a unique insight into the way small local communities, settlements of a dozen or so residents, were affected by large historical events: the Teutonic Wars, the Deluge or plague.

UNREST ON THE BORDERS

In an interview with PAP-Science in Poland, Słowiński explained that the pollen of plants that dominated in the area were preserved in lake sediments. There was more pollen of crops (mainly rye) during long periods of peace. After the wars, usually in a few decades, pine and birch pollen would replace rye and start to dominate.

Conversely, in the times of peace, when mainly merchants and wanderers travelled on the route, farmers could peacefully tend to their crops. But during wars, the trail was used by troops. One can guess that crops were burnt down, the locals was killed, drafted or suffered as a result of diseases transmitted by soldiers.

As a result of these events, there was a decrease in human pressure on the natural environment, and the forest would grow in places where cultivated fields used to be. Although environmental changes concerned small human clusters, their traces can be seen today.

Słowiński said: “This research shows that we, humans, have to put a lot of energy to keeping the agricultural landscape and stopping wild nature.”

The pages of history textbooks on the Middle Ages are usually filled with the names of significant persons, families, countries, towns, laws or customs.

This time, the researchers decided to completely refresh the narrative and find out how the presence of a road affected the environment and the local communities.

This unconventional approach allowed them to present a story about how historical events affected very small communities and the natural landscape.