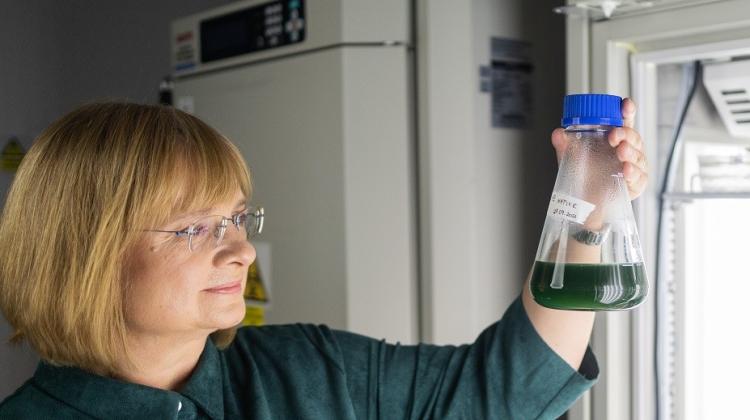 Warsaw scientists have grown a new strain of red algae that can be used in the fuel and pharmaceutical industries, in environmental protection, and in fundamental research - genetics, biology and cell evolution.

The scientists from the Centre of New Technologies at the University of Warsaw say the algae can be a rich and inexpensive source of large amounts of biomass for the production of biofuels. Biomass can also potentially serve as a natural source of hydrogen fuel.

Moreover, due to its properties, red algae will prove useful in removing heavy metal compounds from water environments and wastewater. Yet another application may be found in the pharmaceutical industry, which develops drugs based on the mass production of selected proteins from a medium with a high content of sulphates, nitrates and phosphates - for example, mRNA-based vaccines.

The new strain of microalgae was discovered as a result of research the scientists carried out in 2021 under the supervision of Professor Joanna Kargul from the Laboratory of Photosynthesis and Solar Fuels. The experiments consisted in subjecting a selected species of red algae, Cyanidioschyzon merolae 10D, to a multi-stage process of adaptation to a neutral pH.

Professor Kargul said: “C. merolae 10D is a unique species of algae that can cope well in extreme aquatic conditions with a number of highly toxic agents. In nature, this alga lives in hot, acidic sources of volcanic origin with a pH close to zero and a temperature exceeding 50 degrees Celsius.

“This alga is the only organism that lives in conditions so harsh that even thermophilic cyanobacteria or archaea, known for their great adaptability through evolutionary development, die in them. Volcanic microalga C. merolae is known for its very simple, primitive structure and extremely modest genetic material. Due to the very limited number of genes, C. merolae is the subject of much research by evolutionary and cell biologists.”

The researchers cultivated C. merolae 10D cells, gradually changing the water conditions by increasing the pH. In a very short time the algae developed evolutionary changes in the regulation of their genes and adapted to living at a pH close to neutral (7), in a wide temperature range from 18 to 45 degrees Celsius.

Professor Kargul said: “Over the course of just a few months, the species, the genetic code of which has remained unchanged for millions of years, underwent a directed natural evolution, adapting the organism to new living conditions.

“Not only have we obtained a new red algae strain with altered regulation of gene expression, we have also developed a method of obtaining it. Importantly, the new strain of algae can be easily cultivated in environmental conditions of our native climate, which significantly reduces the costs of potential industrial cultures.”

After analysing the lipidogram of the new strain, scientists found that it shows a higher productivity of valuable ingredients compared to the strains of algae currently used in the production of biofuels, for example in Japan.

Moreover, the algae grown today for the production of biofuels require more cost-intensive conditions compared to those sufficient for the development of the strain obtained at the University of Warsaw. The new strain contains more unsaturated fatty acids compared to other algae. Also, unlike the original strain that was the subject of the study, the new strain deposits a profuse biofilm that could be used in a variety of industries.

Dr. Przemysław Dubel, head of the University Technology Transfer Centre at the University of Warsaw, said: “The discovery has great commercial potential, which we plan to use in several fields.

“Our goal is to establish partnerships with selected companies and launch R&D projects to clarify the conditions, in which the new strain could be used in the production of biofuels.

“In addition, a promotion process will be carried out to use the discovery in bioremediation, wastewater treatment from heavy metals and their recovery. The fact that the new species of red algae can tolerate the temperature typical of our climate may be favourable here.”

Red algae are a type of algae covering about 5,000 species that, in addition to chlorophyll, contain other dyes that give them their characteristic colour: red phycoerythrin (absent in C. merolae) and blue phycocyanin, commonly used in the food and chemical industries.

From the point of view of industrial application, the metabolic products of red algae are important - lipids, proteins and polysaccharides (such as agar). Cyanidioschyzon merolae is characterized by the lack of a cell wall, which is important for industrial processes - unlike other algae, extracting valuable natural ingredients from it does not require destroying the cell wall, which makes these ingredients more accessible.