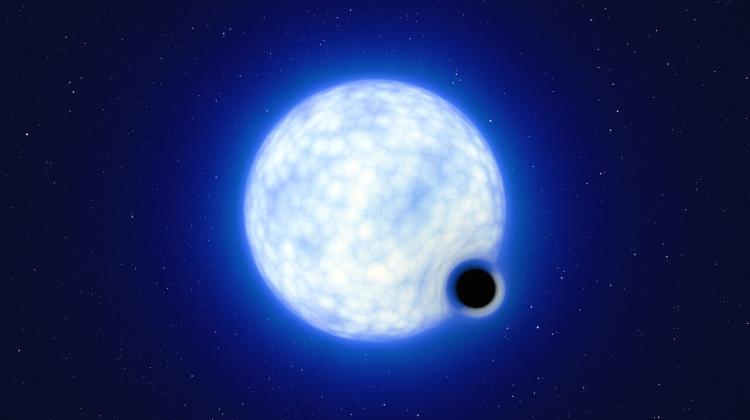 Artist’s impression showing how the binary system VFTS 243 might look like if we were observing it up close. The system, which is located in the Tarantula Nebula in the Large Magellanic Cloud, is composed of a hot, blue star with 25 times the Sun’s mass and a black hole, which is at least nine times the mass of the Sun. The sizes of the two binary components are not to scale: in reality, the blue star is about 200 000 times larger than the black hole. Credit: ESO/L. Calçada

An international group of astronomers has discovered a 'dormant' stellar-mass black hole in the Large Magellanic Cloud, a neighbour galaxy to our own.

Stellar black holes form as a result of the gravitational collapse of massive stars. If this occurs in a binary system, the result will be a bright star and a black hole orbiting each other. In the event the black hole does not emit high levels of X-ray radiation, astronomers refer to it as 'dormant'. Dormant black holes are particularly hard to detect since they do not interact much with their surroundings.

While similar black hole candidates have been proposed before, this is the first stellar-mass 'dormant' black hole unequivocally detected in a galaxy other than the Milky Way.

Astronomers led by Dr. Tomer Shenar from Amsterdam University studied nearly 1,000 stars in the Tarantula Nebula region looking for binary systems containing black holes as companions. One of the systems, called VFTS 243, consists of a hot, blue star weighing 25 times the Sun’s mass and an invisible companion with a mass at least 9 times the mass of the Sun. The researchers tested various hypotheses about the nature of this dark component of the system and concluded that it could only be a 'dormant' black hole.

The discovery was made as a result of six years of observations with the Fibre Large Array Multi Element Spectrograph (FLAMES) on the European Southern Observatory’s SO's VLT at the Paranal Observatory in Chile.

The observations conducted by astronomers from the OGLE team using the Warsaw Telescope at Las Campanas Observatory in Chile were also essential . The OGLE data showed that the brightness of the system minimally changes during the orbital period due to the gravitational distortion of the main component by the black hole. The observed effects were perfectly consistent with the model’s predictions.

The black hole appears to have formed without a prior supernova explosion, collapsing completely. This is evidenced by the absence of the explosion debris and the nearly circular orbit of the system. This supports the hypothesis that the most massive stars may end their lives this way.

The scientists predict that in the future, the other star in the system will also turn into a black hole, thus creating a system of two black holes slowly tightening their orbit due to the emission of gravitational waves. The merger of the components will take place in a very distant future, tens or even a few hundred billion years from now.

Researchers believe that there are thousands of dormant black holes in the Milky Way and the Magellanic Clouds. In this context, it is worth adding that another publication was recently accepted for publication in Astronomy & Astrophysics, presenting the results of a similar discovery: a promising candidate for a stellar mass black hole in the HD 130298 system in the Milky Way.