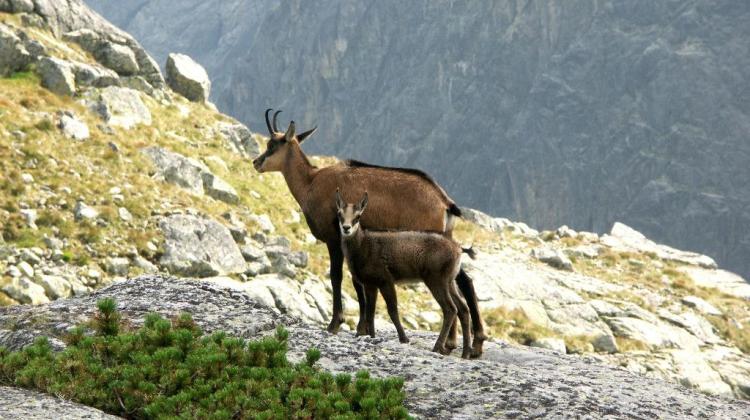 Autumn chamois counting in the Tatra showed that the population of these rare animals declines. Naturalists counted 1345 chamois, including 124 young. In the autumn of last year, a record number of 1,389 goats were counted. According to the naturalists, slight decline is a natural thing.

On Friday, naturalists from the Tatra National Park and the sister park in Slovakia summarised the autumn chamois counting campaign.

Paweł Skawiński, former director of the Tatra National Park, noted that such a small decline of the chamois population is not alarming. "Fluctuations in the animal world are natural. There are peak years for the population, and later come the years when that trend reverses. As long as these phenomena are not extreme, there is no cause for alarm. The worst would be a clear drop indicating extreme mortality counted in hundreds of animals" - said Skawiński.

The naturalist pointed out that one of the most dangerous threats to the chamois would be an animal disease such as blindness, which occurs in Alpine chamois.

Since the greater part of the Tatra Mountains is within the Slovakian borders, chamois counting is carried out simultaneously on both sides of the mountains. Polish and Slovak naturalists on the north and south side of the mountains simultaneously climb from the lower montane forest zone toward the ridge of the Tatras. The teams count and photograph herds of chamois to avoid counting the same animals twice.

1090 chamois have been counted on the Slovak side, and 255 on the Polish side of the mountains. Naturalists have observed that the most numerous herds dwell in the Belianske Tatras which are entirely on the Slovak side.

Already during the spring counting in the current year, naturalists observed a decrease in the number of these animals.

In the spring after births there will be another chamois counting and we will find out how many animals will have survived the winter and how many new chamois are born. The counting involved 100 Slovak and almost 80 Polish naturalists.

Record numbers of chamois have been recorded in the Tatra Mountains for several years. In 2012, their numbers in the highest Polish mountains exceeded a thousand animals. The largest decline in the Tatra chamois population occurred at the turn of the century - only 300 chamois were counted in the whole Tatras. The rapid increase in population of these animals occurred in 2007, and in 2012 their number exceeded one thousand.

The count of Tatra chamois is organized since 1954, and together with the Slovaks since 1957. Chamois is a symbol of both Polish and Slovak Tatra National Park.

Chamois live in small herds that have a specific structure. The leader is always an experienced female with a calf. Other females with young, as well as so-called yearlings and two-yearlings also remain in the herd. Grown males usually live solitarily or form bachelor groups, joining herds in fall, during mating season.

In Poland, apart from the Tatra the chamois also live in the Sudetes, but it is an alpine species brought to the mountains by the Czechs in the early twentieth century. A small flock of chamois crossed the border to Poland in the 1970s and settled on the slopes of Śnieżnik.(PAP)