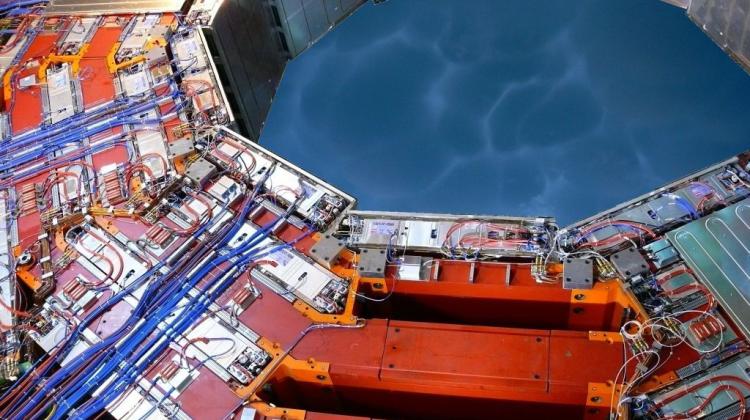 It will take nearly two years to prepare the Large Hadron Collider (LHC) for operating at higher energies. The collider experiments will resume in January 2015, Prof. Agnieszka Zalewska, President of the CERN Council revealed CERN plans in an interview with PAP.

Scientists from the ATLAS and CMS experiments have yet to do a lot of work to thoroughly examine the recently discovered particle, which may be the Higgs boson. For now, they can focus on the analysis of previously collected data. Some time will pass before both experiments can resume work and collect more data to analyse. In February 2013, the Large Hadron Collider (LHC) will be shut down for nearly two years. It will be prepared for operation at even higher energies.

"Collecting data from the LHC for proton collisions at 8 TeV was completed in December 2012, and now the data are being processed. Better investigation of the newly discovered Higgs-like particle is of course a priority. If we combine all the data from the ATLAS and CMS experiments, we might be able to determine the spin of the particle. For now, there are some indications that it is a scalar, a particle with spin zero. This is expected of the Higgs particle. We hope that this can be confirmed. This is an extremely important characteristic of this particle" - said in an interview with PAP Prof. Agnieszka Zalewska from the Institute of Nuclear PhysicsPAS.

The physicist explains CERN is currently preparing the accelerator to operate at target energy, which is about 14 TeV. "All connections between the magnets will be removed and rebuilt, much better and safer - described Prof. Zalewska. - In addition, some of the magnets have to be replaced, and the accelerator safety system improved. The LHC will be out of commission for nearly two years. For most of this period, all initial acceleration accelerators will also be shout down. Starting June 2014, they will be progressively switched on. The LHC will be switched on in early 2015. It will be the collider re-start" - she added.

She explained that at higher energies it will be more likely to observe the Higgs particle and better investigate its properties. But physicists have other expectations. "It would be extremely interesting to find new phenomena, beyond the Standard Model. W know that the model is an effective theory, which works great even at already examined LHC energies. But we expected that at some point phenomenon beyond the Standard Model will appear. This is very important and interesting" - said Prof. Zalewska.

The physicist added that for the CERN management is directly responsible for the performance of the organization program, and the CERN Council, chaired by Prof. Zalewska, approves the program and monitors its implementation.

"Additional task of the CERN Council in 2013 is the adoption of an Update of the European Strategy for Particle Physics" - said the physicist, and explained that this strategy would affect not only the work at CERN, but the European particle physics in general.

The strategy is being developed by the so-called European Strategy Group, but the CERN Council must approve it. Zalewska reminded that in September 2012 in Kraków a very important conference was held in order to help determine what the European particle physicists wanted to work on. Majority of the 500 participants were European physicists, including delegates to the CERN Council and CERN directors, but representatives of major particle physics laboratories around the world were also present. On the basis of materials and presentations from the conference, a summary was prepared to help the experts from the European Strategy Group develop a strategy. The team meets in late January in Italy to draft a document on the European Strategy for Particle Physics. Then, at the March meeting the CERN Council will discuss and approve this document, and at the end of May, at a special meeting in Brussels, the document will be presented to ministers of innovation and science in EU countries.

"The year 2013 will be the first year when the medium-term CERN research plan should include the components of the newly developed strategy" - explained Prof. Zalewska.

This is not the first attempt to develop a European particle physics strategy. The first such document was prepared in 2006.

Prof. Zalewska believes that taking full advantage of the LHC capabilities will be the number one item in the new strategy. "In the coming years, the Large Hadron Collider is the flagship of particle physics, I dare say not only in Europe, but in the world" - concluded the expert.