Researchers investigate where and how storks sleep during migration to Africa 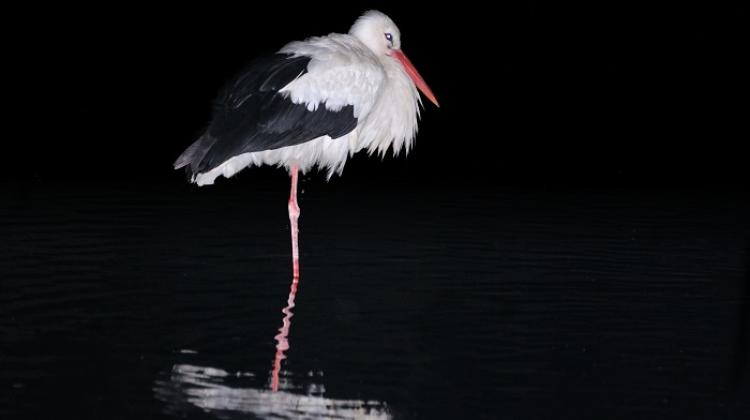 Storks flying from Poland to Africa prefer to sleep on buildings and trees, and when those are not available they spend the night on the ground, according to data from 90 transmitters on birds during their first migration.

There are also many indications that storks do not mind the light and sometimes sleep under lanterns.

During annual migrations, birds travel thousands of kilometres. This requires them to prepare both physically and intellectually: they must know where and how to fly. The authors of the study note that young, inexperienced birds that migrate for the first time and must reach a safe wintering ground are in the worst situation. It is clear that it is impossible to fly all the time, especially when the flight is expensive, and birds need to optimise the method of travelling. It is a bit like driving a car or flying by plane - one needs time to refuel, eat and rest.

Co-author of the paper published in the Journal of Avian Biology, Professor Piotr Tryjanowski from the Poznań University of Life Sciences, said: “Birds definitely need breaks, but it is not that simple, because during a break birds are on the ground, where it is much more dangerous than in the air.

“Most likely, however, there are breaks related to sleeping, because it is known that without sleep the brain is less vigilant and it is better to find a good place to sleep and be ready for the next day's further journey.

“And, what is much more interesting, if this sleep can be disturbed. And if so, then by what factors', says Professor Piotr Tryjanowski, co-author of the paper on white stork migrations, published in the Journal of Avian Biology.

Research was conducted by scientists and naturalists who analysed information about the places and time of stopovers of 90 storks (from the southern part of Poland) during their first journey to Africa. 41 of them reached their destination, the others were killed (eight during the night).

Migrating birds most often spent the night on buildings and trees, but it those were not available - they would spend the night on the ground.

Professor Piotr Profus from the Institute of Nature Conservation of the Polish Academy of Sciences in Kraków said: “The selection of places for spending the night is a fairly simple matter. We can simply observe birds in the evening when thy finish the journey and gather on the roofs of houses, trees or even energy poles.”

Demonstrating whether storks wake up or even move during sleep, the researchers used new methods, for example, transmitters equipped with sensitive GPS -GSM technology that enabled tracking even very small movements, the authors of the publication report.

Joachim Siekiera from the Silesiana Group who was responsible for setting up transmitters and checking their technical condition said: “The transmitter itself weighs about 20 grams, less than 1 percent of the bird's weight, and its capabilities are really amazing. Thanks to these devices we learned a lot about the journey of Polish storks after they leave our country.”

Professor Łukasz Jankowiak from the University of Szczecin added: “The transmitter itself and its signal are not enough. Scientists must still process the obtained data and determine locations. Information about the life of a bird must be combined with the influence of specific environmental conditions. This requires the analysis of gigabytes of data.

“Surprisingly, at night they moved less near the sources of artificial light, such as illuminated streets or yards.”

The researchers concluded: “It seems that, paradoxically, artificial light guarantees some peace for young storks, or at least less exposure to attacks from predators. Previous information about predators' attacks on sleeping birds were only anecdotic, but it was certainly an extremely important selective factor in the past.”