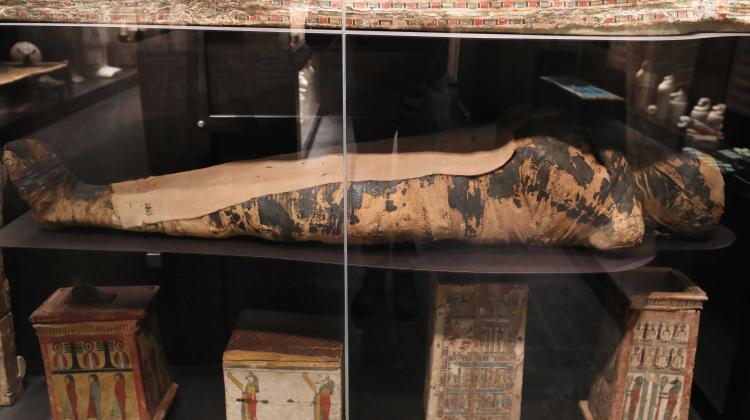 A 2,000-year-old Egyptian mummy that was thought to be pregnant, did not have a foetus in her pelvis but ‘a mummified organ’, say scientists.

Researchers at the National Museum in Warsaw said that despite X-ray scans and CT images last year revealing what appeared to be a foetus, this was the result of ‘a computer illusion and misinterpretation.’

Instead, the scientists say the images reveal four ‘bundles’.

In April 2021, part of the Warsaw Mummy Project (WMP) team published an article in the Journal of Archaeological Science, which shows that a woman's mummy belonging to the University of Warsaw and exhibited at the National Museum in Warsaw conceals a 7-month-old fetus inside. The authors of the publication came to this conclusion on the basis of the analysis of images obtained using X-ray and computed tomography. Not all researchers, however, agreed with this claim. It was questioned by i.a. radiology expert dealing with mummies - Prof. Sahar Saleem.

Writing in July’s Archeological and Anthropological Sciences (DOI: 10.1007/s12520-022-01598-z), bioarchaeologist and co-founder of the Warsaw Mummy Project Kamila Braulińska said: “The bundles were placed there by ancient embalmers.

“In the bundles there is probably at least one mummified organ of the deceased. It was a well-known practice in ancient Egypt.

She added: “Our article contains a number of spectacular images and links to videos depicting the interior of the ancient mummy, including those made using holographic techniques, which are the latest trend in medicine.

“This is not the first mummy with bundles of this type. Objects of this type are sometimes found in other parts of the body, and similar bundles or substances are found in the pelvis.”

Because the body decomposes more easily when internal organs are not removed, ancient Egyptians instead removed them during the mummification process.

It was three of the four bundles in the pelvis that the previous team interpreted as a foetus.

That the woman was not pregnant is also evidenced by quantitative measurements of radiological densities, as well as the geometric arrangement of the bundles and the comparative characteristics of the materials inside the mummy.

According to the authors of the new article, their predecessors failed to consult a radiology expert prior to publication, although their conclusions were based on medical X-ray and CT images.

They add that the alleged discovery of the mummy's pregnancy resulted from an illusion caused by the phenomenon of pareidolia, a natural human desire to see familiar objects in random shapes.

Braulińska said: “This phenomenon, combined with the lack of consultation of theories with a radiology expert, unfortunately only brought the effect of a global sensation, and not a reliable scientific study.

“Our article proves how important the cooperation with specialists from various fields is in the study of ancient Egyptian mummies, and how rationally and critically one should approach the analysis of the results, putting illusions aside.

“The respect due to human remains is also important.”

The scientists say they used the same computed tomography data as the previous team and, among other things, the same software.

Radiologist Dr. Łukasz Kownacki, who performed a tomographic examination of the mummy and created its first 3D images, said: “We have shown how much the analysis of 3D effects and their interpretation depend on the skills of the software user, who can achieve excellent visualization effects also without being a radiologist.”

For the latest study, the researchers used the capabilities of radiological analyses available at the Department of Diagnostic Imaging of the European Health Centre Otwock, including unique medical holographic software for the Mixed Reality systems, as well as radiological server solutions.

The mummy was brought to Poland in the 19th century. It belongs to the University of Warsaw, but is currently in a long-term deposit at the Ancient Art Gallery of the National Museum in Warsaw. (PAP)