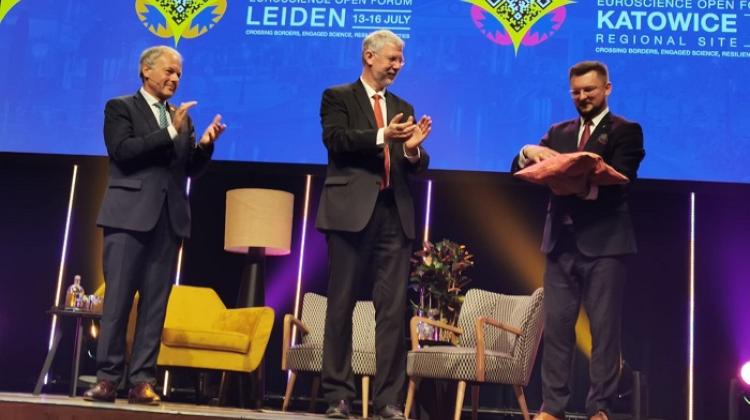 Katowice has been named European City of Science 2024 during the EuroScience Open Forum (ESOF) 2022 conference in Leiden (the Netherlands).

The decision to select Katowice was announced in December 2021, but the official ceremony of bestowing the title took place last week during the conference devoted to research and innovation of key importance for the future of the world.

Professor Ryszard Koziołek, rector of the University of Silesia told PAP: “This distinction is as prestigious as the title of the European Capital of Culture, or the right to organize the Olympic Games.

“Katowice received this distinction as a result of joint efforts of the city authorities and the academic community.”

He added that the awarding of the title is a consequence of the recognition of the city of Katowice, the University of Silesia and other Katowice universities as experienced co-organizers and hosts of global events.

Katowice mayor Marcin Krupa said: “We are not opening the champagne yet, because we know that we have a lot of work ahead of us. He added that the title was an opportunity to increase the involvement of the inhabitants of the region and the scientific community in solving local problems, and would increase the tourist attractiveness of the city internationally.

In addition to the title, Katowice also received the right to organize the EuroScience Open Forum in 2024. According to the city authorities, ESOF Katowice 2024 will be one of the most prestigious scientific and technological events in the world, and the greatest authorities of the world of science will come to the capital of Silesia.

Dr. Anna Budzanowska, plenipotentiary of the Mayor of Katowice for the European Capital of Science Katowice 2024 told PAP: “The capital of Upper Silesia, associated for years mainly with mines and steel mills, is undergoing transformation, and science is its new industry. The symbolic choice of Katowice proves that the most important development challenges are hidden in the innovative potential of the region.”

The title has been awarded every two years since 2004 by the European Association for the Advancement of Science and Technology. Before Katowice, it was awarded to cities including Barcelona, ​​Dublin, Stockholm and Leiden. Katowice is the first city in Central and Eastern Europe recognized as the European City of Science.

According to the European Association for the Advancement of Science and Technology, the title is awarded in order to intensify changes for the society transformation towards science in specific European cities. It is also intended to showcase the richness and diversity of European science, to foster mutual learning, scientific integration and interest in science among younger generations, and to develop European research without borders.