Grants & Awards
This text can be copied

Toruń researcher among the Rising Talents of Science 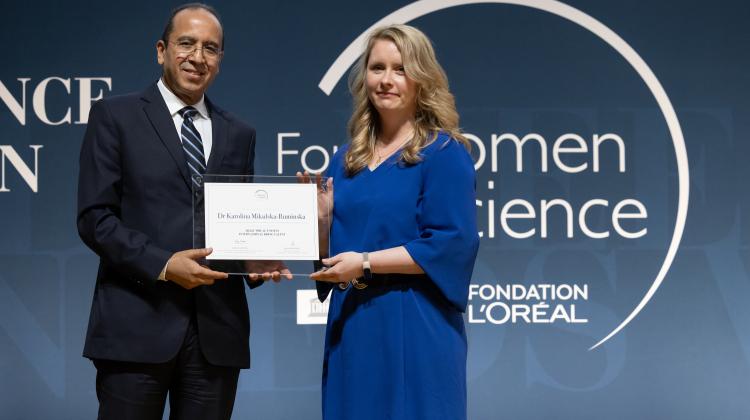 Dr. Karolina Mikulska-Rumińska from the Nicolaus Copernicus University has been awarded in the International Rising Talents programme that highlights the achievements of young women scientists whose research can change the world.

The awards ceremony took place during the Women in Science Week initiated to promote the diversity in science and women's contribution to its development.

The winners are selected from among the national and regional fellows of the L'Oréal-UNESCO For Women In Science programme. The 15 International Rising Talents receive an additional endowment of €15,000, which can be used in any way for the development of the research they conduct, the representatives of the Polish edition of the programme inform.

The researcher affiliated with the Faculty of Physics, Astronomy and Informatics of the Nicolaus Copernicus University in Toruń was awarded for breakthrough discoveries in the context of ferroptosis, a type of programmed cell death, the accurate knowledge of which can contribute to the treatment of cancer or neurodegenerative diseases. In her research, she uses innovative computer methods and focuses on understanding the molecular mechanisms responsible for cell death in the process of ferroptosis.

Dr. Mikulska-Rumińska said: “My research allowed me to determine the locations of inputs/outputs to the place where fatty acid radicals in lipoxygenases are created, and which components of these proteins are crucial for the formation of these toxic products. What's more, as a result, I was able to show how the ferroptosis process can be inhibited, which can be helpful in identifying new drugs that would stop this process and allow to introduce new methods of intervention.”

The laureate has completed two international scientific fellowships, including Sciex-NMSch at École Polytechnique Fédérale de Lausanne in Switzerland, as well as a post-school fellowships at the University of Pittsburgh School of Medicine (USA). She took part in over 10 grants (including hrants from the Polish National Science Centre, Ministry of Science and Higher Education, NIH), in eight of them as a manager/beneficiary. She won the National Science Centre grants PRELUDIUM3 and SONATA15 as well as the AstroChem grant (Centre of Excellence). In addition, she also completed an internship at the pharmaceutical company ADAMED (Poland) and was responsible for managing a computer block in the grant obtained from the pharmaceutical company Shire (USA).

The International Rising Talents have been awarded since 2000 to the most promising women scientists at the key stage of their scientific careers. Dr. Mikulska-Rumińska is the fourth Polish woman selected in the programme. Previously the title was awarded to Dr. Bernadeta Szewczyk, Dr. Joanna Sułkowska and Dr. Agnieszka Gajewicz.