Iberian lynx has fewer harmful mutations than its Eurasian cousin 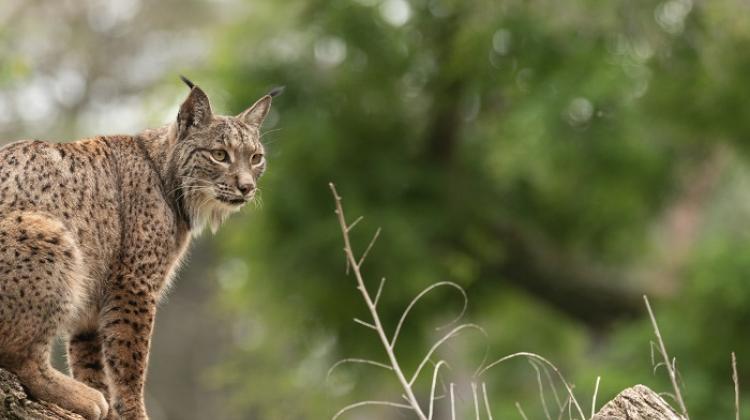 Iberian lynx, the most endangered wild cat species, has fewer harmful mutations than the more common Eurasian lynx, according to new research by scientists from Spain, Poland, France and Russia, published in PNAS.

Do harmful mutations threaten small populations of large carnivores? This question keeps scientists and nature conservation organizations up at night. Important information on this subject has been provided by an international team of researchers led by Dr. José Antonio Godoy from the Doñana Biological Station in Spain, with participation of scientists from the Mammal Research Institute PAS in Białowieża and the Faculty of Biology of the University of Białystok. The participation of Polish scientists in the research project was financed by the National Science Centre.

The research results were published in the journal 'Proceedings of the National Academy of Sciences (PNAS, DOI: 10.1073 / pnas.2110614119), and Polish co-authors of the study informed PAP - Science in Poland about their contribution.

The study suggests that the Iberian lynx, the most endangered wild cat species, has fewer harmful mutations than the more common, widespread Eurasian lynx. Does this mean, however, that small, isolated populations of large carnivores are safe?

The authors of the study analysed the entire genomes of the Iberian and Eurasian lynxes to identify differences in the burden of harmful mutations between the two species. The Iberian lynx has been in isolation for at least 200 years, with only a few dozen individuals living in the wild. The Eurasian lynx, on the other hand, ranges from Central Europe to East Asia and is not considered an endangered species according to the IUCN. However, some of its populations, such as those in north-eastern Poland, are also characterized by small numbers and a low level of genetic variation, probably due to human pressure.

'Thanks to this research, we have learned the details of a little-studied aspect of genetic erosion in small, isolated populations, the so-called genetic burden, or the frequency of harmful mutations. Obtaining such data was possible thanks to the earlier mapping of the reference genome of the Iberian lynx and examining its functional genetic variability by a team of Spanish scientists', the scientists write in the release sent to Science in Poland.

'With this information, we have been able to quantify the number of deleterious mutations for each individual. We compared species with different demographic histories to find if the smaller populations accumulate more or less than the larger ones', explains José Antonio Godoy, a researcher at the Doñana Biological Station.

The conclusions of the study indicate that the Iberian and Eurasian lynx populations have a similar neutral and slightly harmful mutation burden.

A seemingly surprising result, the researchers note, was that Iberian lynx populations are less burdened by severely deleterious mutations. This is consistent with the population genetics theory, but has not previously been observed in large carnivore populations at risk of extinction. 'The deleterious recessive mutations (that is, those where two copies are needed for the defect to be expressed) have more opportunities to be expressed in small populations, thanks to the higher consanguinity. In this case, natural selection removes them faster than in larger populations', the researchers explain.

The researchers wondered why the process of removing individuals with harmful mutations did not work as effectively in small Eurasian lynx populations. Why was this apparently not endangered species shown to have a higher degree of genetic burden than the Iberian lynx? The problem is that the mechanism for removing harmful mutations needs time to start working. It turns out that in the case of the Iberian lynx, enough time has passed since the species reached extremely low numbers and its populations managed to partially 'purge' a number of harmful mutations.

In contrast, Eurasian lynxes did not have this opportunity. This poses a serious threat in a situation where the decline in the population size occurs suddenly (from a genetic point of view), as like in north-eastern Poland or Scandinavia. In these populations, the period of the species extermination lasted 'only' 20-30 years, but it was very intense. It can therefore be said that a species whose populations have been small for a long time in its history may be less susceptible to the genetic consequences of mating between individuals with a higher degree of kinship than a more common species, whose populations have experienced a stronger decline, such as the Eurasian lynx.

'This means that the lynx population in north-eastern Poland has not yet managed to 'purge' harmful mutations. In this case, the interbreeding of closely related individuals may quickly lead to an even faster extinction', adds Professor Krzysztof Schmidt from the Mammal Research Institute PAS, head of the Polish part of the project.

'It also provides us with an important clue for rescue programs for endangered populations of a species with very low genetic variability', says Professor Mirosław Ratkiewicz from the Faculty of Biology, University of Bialystok. 'An attempt to boost this small populations with individuals from large populations may turn out to be a real +Trojan horse+ as we may unintentionally introduce animals with a high genetic burden. By breeding with lynxes in local, small populations, they can lead to an increase in the frequency of harmful alleles and, consequently, cause rapid extinction'.

It also appears, the researchers suggest, that these results do not mean that the Iberian lynx is in a better genetic condition than its Eurasian relative. 'Some of their deleterious mutations increase in frequency and can eventually become fixed, replacing the beneficial mutations in all individuals within a population', explains José Antonio Godoy. He adds that 'Some of these mutations could be the cause of fertility loss or some genetic diseases that are relatively frequent in this species, such as idiopathic epilepsy or cryptorchidism'.

These study has also led to the creation of a catalogue of deleterious mutations in lynx, of which are many, over nine thousand. However, further analyses are needed to test their association with possible diseases and abnormalities. If confirmed, the identification of the responsible mutations will help improve the current genetic management of this species. It will be possible to minimize the disease incidence through the appropriate selection of individuals for resettlement, which at the same time will not compromise the already limited genetic variability in small populations.