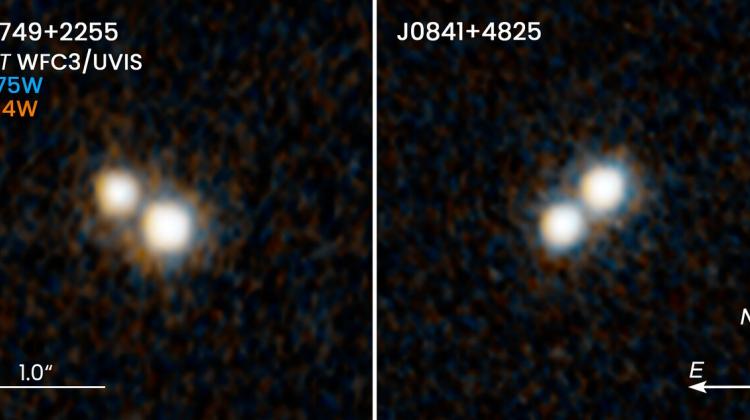 An international group of scientists, with the participation of Professor Marek Biesiada from the National Centre for Nuclear Research, proposes using quasars to determine the distance to celestial bodies. The method could be applied to objects, whose image reaches us after even 13 billion years.

Quasars are extragalactic objects, so-called active galactic nuclei, consisting of a central supermassive black hole that pulls the surrounding matter (the so-called accretion). The accretion disk, from which material flows into the black hole, is surrounded by a spherical shell called the hot crown, and further away from the disk, a dust torus is formed. The accretion disk radiates in ultraviolet. UV photons pass through the hot corona where free electrons have very high kinetic energies. Photons with energies in the UV range have short wavelengths - they are more 'particles' than 'waves'. As a result, they interact with electrons by colliding with them like billiard balls and take energy from electrons (the Compton phenomenon). In this way, the UV photons become X photons. The relationship between the radiation powers in UV and X is non-linear, but it can be described by a mathematical model.

The authors of the study recently published in Monthly Notices of the Royal Astronomical Society (https://doi.org/10.1093/mnras/stab2154) showed, based on a sample of 2421 quasars collected in 2020 by the Italian team of E. Lusso and G. Risaliti, that the correlation of UV-X brightness is strongly related to cosmological distances.

Professor Biesiada said: “This is because this correlation is established on the observed brightness levels, and it is physically responsible for the powers of UV and X radiation. The observed brightness levels, in turn, depend on power and distance. Since quasars are also observed at the distances of the applicability of the standard supernova Ia method, we can measure the distance to them using two methods: SN Ia and the new one. This allows to calibrate the quasar method.”

Scientists expect that the new method will enable the determination of cosmological distances to very distant objects, for which the redshift 'z' resulting from the expansion of the Universe is up to 7.5.

The authors conducted tests to verify the validity of the proposed method. One of them was the reconstruction of the Universe’s evolution according to the commonly accepted ΛCDM model: Universe with cold dark matter and with dark energy accelerating its expansion.

Biesiada said: “The data obtained using the +quasar method+ showed, in the limit of uncertainty, a high consistency with the ΛCDM model.

“We fitted the ΛCDM model to the data, where the parameters of this model were the free variables. The matter density determined on this basis is consistent with the value obtained from other cosmological observations. The essence of this work was a quasar calibration method that did not refer to the cosmological model - so as not to fall into a vicious circle, using quasars later to test cosmological models. We used stochastic Gaussian processes for this purpose. It is a statistical procedure for reconstructing the history of the universe’s expansion that relates only to data, not to a specific model. An outstanding expert in this technique is Professor Arman Shafieloo from Korea, co-author of our work. In addition to this important publication, together with the group of Professor Shuo Cao from Beijing, we managed (in other publications) to use quasars to test alternative theories of gravity and the transparency of intergalactic space.”

He added that with colleagues from China, they have also developed a different sample of quasars. He continued: “This time not based on their UV and X rays, but on the angular dimensions of the quasars observed as compact radio sources. They are not used as candles, but as so-called standard rulers. Standard rulers are objects that whose physical dimensions we can know. The further away such an object of known size is, the smaller it appears (smaller angular size). So we can determine its distance. Our sample goes just as deep in redshift and it is promising to use it together with calibrated UV-X quasars.”