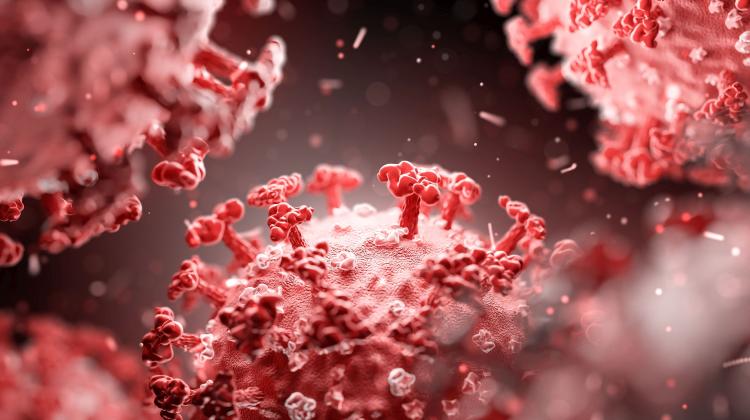 Scientists have discovered new factors required for the SARS-COV-2 virus to replicate in human cells.

The joint Polish-Chinese team led by Professor Krzysztof Pyrć Małopolska Centre of Biotechnology of the Jagiellonian University carried out a complex analysis of SARS-CoV-2 using a genome-wide CRISPR-Cas9 (consists in cutting DNA and disabling the faulty gene operation or replacing it with a different version).

The cells used included HeLa (one of the most important cell lines for medical research, derived from cervical cancer cells taken in 1951 from Henrietta Lacks) and Vero E6 (grivetCercopithecus aethiops kidney cells).

The used cells had overexpressed ACE2 receptors, among other things.

The 'versatility' of the coronavirus is surprising because apart from the host cell receptors necessary for an effective infection, the interactions between the cell and pathogen are usually species-specific.

The researchers say that detailed understanding of the host-virus interaction should allow them to design and manufacture drugs useful not only against COVID-19, but also possible future pandemic.

The study aimed to identify the factors required for the virus replication, with the researchers selecting 178 'promising' genes, on which they conducted both laboratory in vitro experiments and computer simulations (in silico).

Comparing the results with those of other studies, the scientists found that some of the identified factors also played a role in the replication cycles of other virus. The researchers identified processes required for SARS-CoV-2 replication regardless of the model system. These included the trans-Golgi network, endosomal transport, exocytosis, regulation of signal transduction by P53 class mediator, response to oxygen levels, metabolic processing of phosphatidylinositol and differentiation of epithelial cells.

Analysis of several models can allow them to identify universal factors required for viral replication, which is common to all models.

While the knock-out (disabling) of some genes resulted in only a moderate drop in viral replication, the EPGN knock-out contributed to a significant reduction in the number of copies of the viral RNA. Eliminating the deubiquitinase USP17, which affects cell proliferation and regulates inflammatory response, also resulted in a reduced virus replication.

Coronaviruses were first discovered in animals about 80 years ago, thanks to the use of electron microscope. They appear to have a unique ability to jump from species to species and infect many different organisms. The SARS-CoV-2, causing acute respiratory distress syndrome, is the third (after SARS and MERS-CoV) and probably not the last animal coronavirus that affected humans in the 21st century. The clinical picture of infection may vary from an asymptomatic, mild respiratory tract infection to severe disease with lung damage, multi-organ failure and death.

The work was financed with the Ministry of Science grants for research on SARS-CoV-2 and a National Science Centre grant.