Astronomers discover black hole in star cluster outside our galaxy 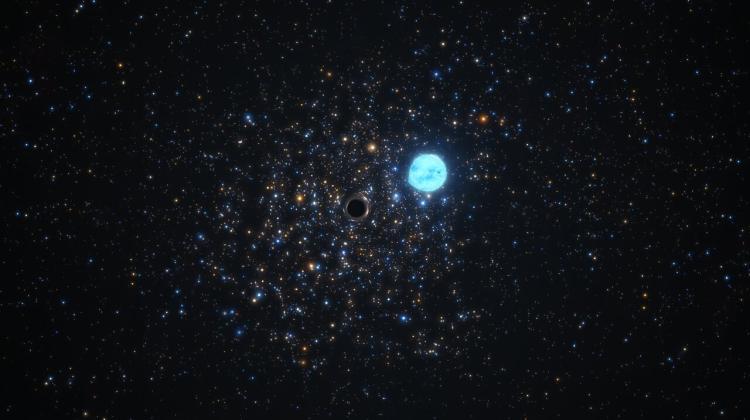 Artist's impression shows a compact black hole 11 times as massive as the Sun and the five-solar-mass star orbiting it. The two objects are located in NGC 1850, a cluster of thousands of stars roughly 160 000 light-years away in the Large Magellanic Cloud, a Milky Way's neighbour. The distortion of the star's shape is due to the strong gravitational force exerted by the black hole. Credit: ESO/M. Kornmesser.

Astronomers have detected a small black hole in a star cluster in one of the galaxies outside the Milky Way. In their research, they used the VLT telescope operated by the European Southern Observatory (ESO) as well as data from the Polish OGLE project conducted by the University of Warsaw.

The black hole is hidden in a cluster of stars called NGC 1850, located 160,000 light years from Earth. The cluster belongs to the Large Magellanic Cloud, a neighbouring galaxy of the Milky Way.

Sara Saracino of the Astrophysics Research Institute of Liverpool John Moores University in the UK, who led the research project, compares her work to 'Sherlock Holmes tracking down a criminal gang from their missteps'.

She said: “The result shown here represents just one of the wanted criminals, but when you have found one, you are well on your way to discovering many others, in different clusters.”

Small stellar-mass black holes of this type have been detected before in other galaxies, mainly by analysing X-rays emitted in the process of matter absorption by the black hole, and for several years also thanks to observations of gravitational waves.

For the analysis, the scientists used data collected over two years by the Multi Unit Spectroscopic Explorer (MUSE) instrument on the Very Large Telescope (VLT) at the Paranal Observatory of the European Southern Observatory (ESO). MUSE allows scientists to observe crowded areas such as the inner regions of star clusters while analysing the light from each individual star, obtaining information about thousands of stars in one exposure.

Additional data came from the Optical Gravitational Lensing Experiment (OGLE) project run by the University of Warsaw, and from the Hubble Space Telescope (operated by NASA/ESA).

Astronomers now hope that the dynamic method will allow them to detect more young black holes in other star clusters. By comparing them with more mature black holes in old clusters, they can learn more about their evolution.

The results of the research project are presented in a paper to be published in the scientific journal Monthly Notices of the Royal Astronomical Society. Astronomers from the UK, Italy, Sweden, Spain, Germany, Australia and Canada were involved in the project. (PAP)