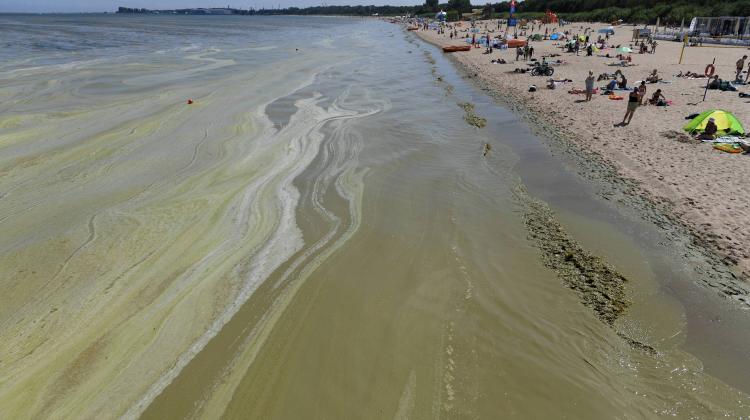 Scientists are trying to discover why every three years there is a surge in cyanobacteria blooms on the Baltic coast.

Scientists are trying to discover why every three years there is a surge in cyanobacteria blooms on the Baltic coast.

Microbiologists noticed the phenomenon in 2012, 2015 and 2018, and are now expecting it again this year.

Dr Justyna Kobos from the University of Gdańsk said the regularity is odd as it can not be correlated directly with any known factor favouring blooms, such as increasing temperature as a result of climate warming or water pollution.

She said: “Our observations show that when comparing the decades, temperature increase was important for the occurrence of cyanobacteria.

“On the annual scale, we have observed a trend that on average every three years their number in the Baltic coastal zone is increased, and it can not be correlated with any factor or microelements.

“Looking for the reasons, researchers point to not yet completely known biological causes, such as the participation of bacteriophages or cyanobacteria cell cycle.

“Satellite images of the sea indicate a great potential that this year toxic blooms will also be abundant. If the weather is conducive, they will come to the surface of the water again and probably reach the coast.”

Blue-green algae belong to the kingdom of bacteria. They live in seas, oceans and inland waters: lakes, ponds, even swimming pools. As far as we know, they were among the first microorganisms that began to use sunlight as a source of energy to obtain hydrogen from water. The 'side effect' of this process was oxygen, which then enabled the emergence of higher organisms that use oxygen to breathe.

But for Polish vacationers, cyanobacteria are associated with closing beaches, prohibited swimming in the sea and spoiled vacation plans. The reason are blue-green algae blooms in water. As a result, a characteristic foam of these microorganisms may form, and water changes colour to green. Blue-green algae multiply rapidly when water reaches high temperature, approx. 18-20 degrees C. In the Baltic Sea, they most often bloom in the waters of Gulf of Gdansk

Out of over 2,000 cyanobacteria species only a dozen or so form blooms, mainly those occurring in sweet waters.

Toxins produced by cyanobacteria can be dangerous to human and animal health, causing disorders of the digestive and nervous systems and skin irritation. In the Baltic, the source of the harmful blooms are Blue-green algae of the Nodularia spumigena species.

Dr. Koboa said: “The Baltic is a natural environment for cyanobacteria. Vacationers complain about closing the beaches, although we, humans, have contributed to the intensity of toxic blooms to some extent, mainly by causing global warming.”

She added that the higher levels of nitrates from agriculture in the sea do not contribute to the blooms in the Baltic.

She said: “Nodularia spumigena can bind atmospheric nitrogen from the air, so these cyanobacteria are independent of the level of nitrates in water. They depend more on phosphates, although there are studies that show that excess of phosphates also does not favour their development. In my opinion, the increase in the temperature of the sea and air is the key factor conducive to the development of blooms.”

Citing a study by Swedish scientists who monitored the occurrence for 40 years, Kobos said: “They analysed these data statistically, taking into account factors such as water and air temperature, levels of nitrates, phosphates, and it turns out that they are able to explain the recorded intensity of blooms over the years only in 45 percent.

She added that cyanobacteria are a very interesting research object and have huge biotechnology potential. Researchers study them, searching for antiviral, antibacterial, antifungal, anti-cancer compounds.

The quality of bathing areas in Poland can be tracked on the Chief Sanitary Inspectorate website: https://sk.gis.gov.pl/index.php/kapieliska/mapa

Information on the condition of the water of selected bathing areas, including satellite images and water photos, can also be found on the website of the Division of Marine Biotechnology of the Institute of Oceanography, University of Gdańsk: https://ocean.ug.edu.pl/pages/pl/o-instyci/zaklady/zbm/kapieliska-2021.php (PAP)