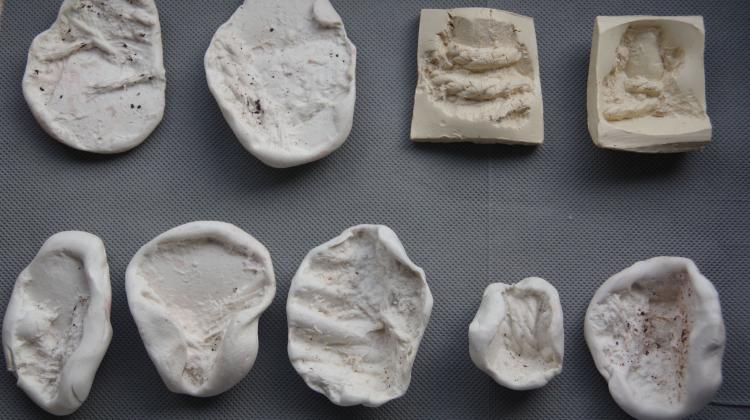 Plasticine imprints of the bottoms of clay seals from Lerna in Argolis in the collection of the Corpus of Minoan and Mycenaean Seals in Heidelberg, credit: A. Ulanowska

A Warsaw University archaeologist has uncovered the identity of dozens of previously unknown types of textiles found on Bronze Age seal imprints from Greece.

Dr. Agata Ulanowska made her discovery after analysing the silicone casts and plasticine imprints, which are stored in Germany in the archives of the Corpus of Minoan and Mycenaean Seals at the University of Heidelberg.

She said: “No one realized that by analysing the imprints, it would be possible to make new findings regarding fabrics, among other things. Meanwhile, the archives of the Heidelberg Corpus turned out to be a goldmine of information. I estimate that textiles are imprinted on up to 1,600 artefacts from the archive of several thousand prints.”

Until now, scientists have only seen strings and straps on these prints, while the wealth of imprinted products is enormous,

In the Mediterranean, seals have been widely used for several thousand years to indicate ownership or secure access to various types of rooms and objects. Seals were placed on doors closed with a pin and string, lids of chests, boxes and baskets, outlets of vessels wrapped in fabric and tied with a string, as well as documents (for example, in the form of small packages made of parchment rolled up and tied with a string).

Thousands of imprints on clay lumps, accidentally fixed by burnout in fires, have survived to our times. After removal, clay seals were thrown away or stored for administrative purposes, for example to record the number of entries to a specific room. On the outside (where the stamp was applied), the patterns found on the stamps are visible. They include geometric and plant motifs, numerous depictions of animals, inscriptions in Aegean scriptures and complex religious scenes involving people. It is unclear if and how the decoration of the seal was related to the social function or position of the seal user. It is known, however, that one person could have and use several seals.

This wealth also applies to raw materials. It was known that Aegean fabrics were most often made of linen and wool. Thanks to digital microscope analysis, the researcher identified eight groups of raw materials, including tree phloem, club-rush, wicker, straps, but also leathers with hair, smooth leathers and parchment.

Ulanowska examined prints from two archaeological sites that were important administrative centers: Lerna in Argolis and Phaistos in Crete. They are separated by about 750 years. It turned out that in the latter Phaistos, not only was a wider selection of raw materials used, but also more textile techniques.

She said: “For the first time we have tangible evidence of changes in textile technology,” pointing out that in Phaistos, strings were not only twisted in various ways, but also braided, and thin straps were also used for tying. Imprints of leather bags and products made of leather with fur have also been preserved.

She added: “It is clear that the technology of producing textiles significantly changed over time, which archaeologists could only guess before, due to the small number of preserved fabrics.”

Information about the project can be found at: https://textileseals.uw.edu.pl/, along with a database of textile prints from clay seals and depictions from Aegean seals.