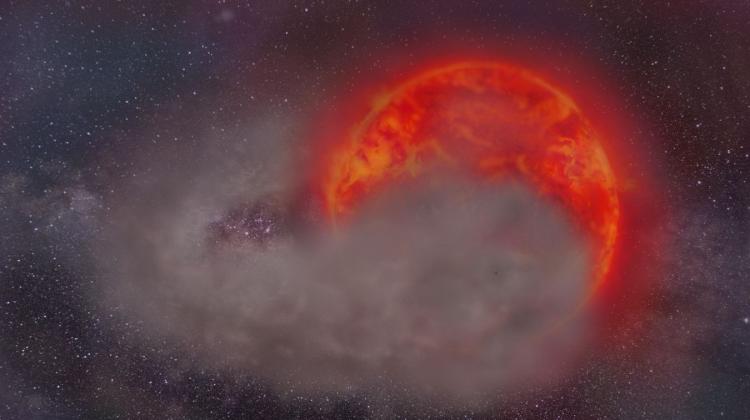 An artist's impression of a red giant obscured by a cloud of dust. The cloud surrounds a low-mass stellar companion, for example a brown dwarf. Credit: Matylda Soszyńska/Astronomical Observatory of the University of Warsaw.

About a third of the stars called red giants exhibit a certain brightness variability that has long remained unexplained. Thanks to new analyses, scientists from the Astronomical Observatory of the University of Warsaw have found that the cause is the presence of another object near the star, immersed in a cloud of dust.

Red giant is one of the stages of the evolution of stars such as the Sun. As the star runs out of fuel for nuclear reactions, it significantly increases its size (the radius increases hundreds of times), and begins to lose mass due to intense star wind. In addition, red giants begin to pulsate, which translates into changes in the brightness of these stars.

But in the case of about 30 percent of red giants, astronomers observe additional variability, with periods of several months to several years, usually ten times longer than pulsation periods of these objects. This phenomenon, called Long Secondary Period (LSP), has been known for a century and so far remained unexplained.

Researchers attempted to explain this type of variability with the occurrence of nonradial oscillations, formation of huge convection cells, temporary dust ejection from the star surface or the presence of dark stains in the photosphere. However, none of these concepts could explain all observed properties of LSP stars. Long secondary periods in LSP stars is currently the only unexplained type of stellar variation.

A team of astronomers from the Astronomical Observatory of the University of Warsaw, led by Professor Igor Soszyński, has been exploring this problem for years. In their works, the scientists use the photometric observation database from the OGLE project - sky survey carried out for almost 30 years by Warsaw astronomers led by Professor Andrzej Udalski. OGLE observes 2 billion stars in the Milky Way and nearby galaxies (Magellanic Clouds).

16 thousand LSP stars in the database were analysed. In addition, for the first time, researchers studied the changes in the brightness of objects in the infrared range. To this end, they used observation data from the WISE project - an infrared-wavelength space telescope. Data for about 700 stars were obtained from this archive. A comparison of brightness curve changes in the optical and infrared ranges showed that only in the latter case there was an additional minimum brightness.

According to Professor Igor Soszyński and his colleagues, such behaviour can be explained with the occurrence of an additional object near the star's surface. This object is surrounded by a dust cloud obscuring the star. The matter in the cloud has a temperature of about 1000-1500 K, and therefore it emits infrared radiation. Every now and then, when the star obscures the cloud, we see a secondary minimum only in the infrared range.

Measurements of radial velocity that check the movement of the star in the Earth-star line of sight (its movement towards and away from us) show that objects with masses smaller than star, probably brown dwarfs, hide in the clouds of dust. The researchers suggest that these objects formed as a result of taking matter by planets on distant orbits around their stars, which after entering red giant phase are now close to the star's surface.