Gdańsk scientists come up with safer and more effective radiotherapy 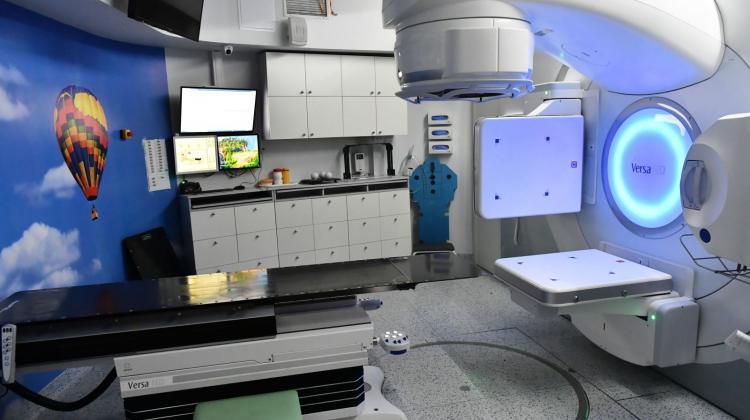 A substance that sensitises cancer cells to radiotherapy and reduces the side effects of treatment has been granted a patent.

It is hoped that the ‘radiosensitiser’ from researchers at the Faculty of Chemistry of the University of Gdańsk will make radiotherapy, which can damage healthy tissues, safer.

Professor Janusz Rak from the Department of Physical Chemistry, Faculty of Chemistry, University of Gdańsk, said: “This problem can be solved by using radiosensitisers, chemical compounds that sensitise cancer cells to ionising radiation. The final effect of using the sensitiser is DNA damage leading to the death of cancer cells.

“The compound generates single-strand breaks in DNA when it attaches to a solvated electron, which is formed during radiolysis of water (the main component of living cells).

“Hydrated electrons (e-hyd) are formed in cells under the influence of ionising radiation in the same amount as the most genotoxic hydroxyl radicals, but do not cause any negative effects when attached to native DNA.

“Only the introduction to the ISdU double helix sensitises DNA to e-hyd. It is worth emphasizing that ISdU works in anaerobic conditions (hypoxia), which on the one hand reduce the destructive power of ionising radiation, and on the other hand are a characteristic feature of solid tumours (about 80% of cases).

“Clinical application of ISdU should therefore lead to increased radiological protection and effectiveness of radiotherapy in hypoxic conditions.”

As a result the therapy can be more effective and the patient will suffer less harm.

'ISdU not only contributes to increasing the effectiveness of radiotherapy, but also allows to reduce the therapeutic dose of radiation, which means better radiological protection of healthy tissues,” said Professor Rak.

For now, scientists have confirmed the action of the substance on cell cultures. They want to start animal tests next year.