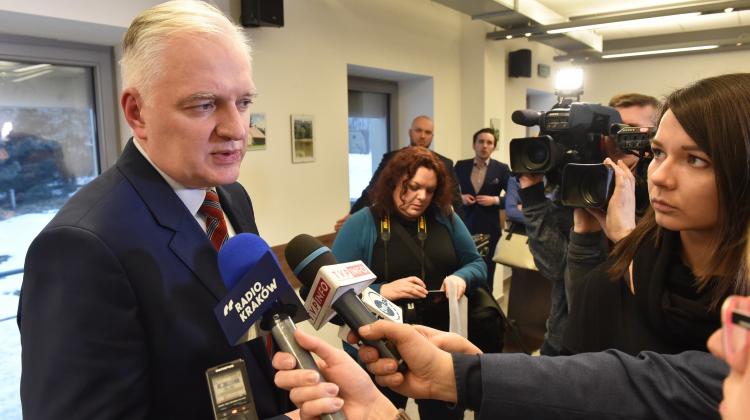 Knowledge of the findings should reach the widest possible audience, not just adults, but also children - Deputy Minister of Science and Higher Education Jarosław Gowin said last week on Monday in Miękinia near Kraków.

During a press conference at the AGH Center for Sustainable Development and Energy Efficiency Deputy Prime Minister pointed out that the social responsibility of science - next to the pursuit of scientific excellence and building bridges between science and business - is the third pillar of the strategy of the Ministry of Science and Higher Education.

"The idea is the knowledge of discoveries and practical applications of these findings should reach the widest possible audience. The idea is also to interest not only adults, but also children in these discoveries, because they are the most absorbent and it is much easier to arouse interest in science at a young age" - said Deputy Prime Minister, talking about the social responsibility of science. He emphasized that "scientific discoveries translate into comfort, quality of life for all Polish citizens".

In the centre in Miękinia Gowin thanked AGH for being involved in this social responsibility strategy. He praised the RES-bus - a mobile laboratory, fitted, among other things, with equipment for presentation of the causes of low emissions and ways to remedy them. "I am sure that thanks to the activity of this bus, not only those, who will continue the achievements of professors will emerge from among the young students of science, but this will also raise the overall ecological culture of the people of Małopolska" - said Deputy Prime Minister and noted that near Kraków and its region one no needs to be convinced that smog and air pollution are a huge problem.

Gowin also added that the RES-bus has a similar mission as the Science-bus - a mobile laboratory that visits mainly primary and secondary schools. Both the RES-the bus, and the Science-bus, allow kids to learn science in a practical way.

AGH Center for Sustainable Development and Energy Efficiency in Miękinia is a modern research and education centre that also cooperates with entrepreneurs. The centre deals with renewable energy sources. It has heating systems based on heat pumps and solar collectors, mechanical supply-exhaust ventilation installations, a hybrid photovoltaic-wind installation. The centre also has a professional system for measuring wind speed and direction, as well as teaching stations for heat pumps, wind microenergy and fuel cells.

The offer of the centre benefits university students, but also students of secondary schools, representatives of local governments, eco-advisors, companies specialising in design and installation of RES equipment.

The centre in Miękinia continues to grow. AGH and the local governments plan to establish the Science and Technology Park Miękinia - the existing infrastructure would be expanded with additional equipment, such as slow-burning boilers, as well as laboratories, including heat and cold storage laboratory, water and sewage laboratory.