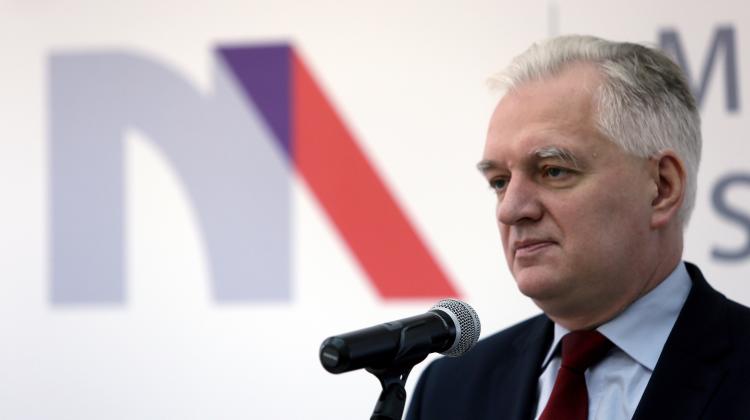 The new way of distribution of grants among universities rewards quality of education, not its mass scale - said on Monday Deputy Prime Minister, Minister of Science Jarosław Gowin. He announced that the regulation introducing the new algorithm will take effect from 1 January 2017.

Last Monday, the Ministry of Science and Higher Education summarized the work on the new regulation. It introduces a new way of distribution of grants from the state budget among universities. Public consultation on the draft regulation ended in the first half of November, and the Ministry of Science has already made amendments to the draft after consultations. Jarosław Gowin said that he would sign the regulation in the coming days - perhaps even this week.

The new algorithm will reward, among other things, maintaining a proper ratio of students to teaching staff. In addition, the subsidy would also be linked to the scientific category of the unit and the number of ongoing research projects. The new algorithm will also reduce the effect of "inheriting" subsidies from year to year by universities. These changes will take place in two stages. In the current algorithm the amount transferred from previous year is 65 percent, in 2017 will amount to 57 percent, and from 2018 it is expected to drop to 50 percent.

"I am convinced that the algorithm will quickly cause a shift to the azimuth of quality, not quantity at all public universities in Poland" - said Gowin. He admitted that the current algorithm rewarded more those universities that accepted more students. In his opinion, the new solution will help overcome "the greatest scourge of Polish universities - mass scale education".

Initially the ministry planned, that there should be one teacher per 11-13 students and doctoral students. After consultation it was decided that the ratio would be 13. "Unfortunately, (...) there are public universities in Poland, where the ratio is one to thirty. It shows how drastic the massification of education process has become at some Polish universities" - the minister said.

Gowin reassured that the new rules include a "safety tunnel" - university may not lose (or gain) more than 5 percent subsidy within one year. This is designed to ensure more stable funding for higher education institutions.

Jaroslaw Gowin said that his ministry was preparing a program that would benefit those institutions, for which the new algorithm would not be favourable. "To balance the negative effects for those universities, we plan to launch a competition within the framework of the POWER programme - competition for adaptation, pro-quality measures" - he said. He added that universities would receive funds if they present a well-thought corrective program.

The meeting at the ministry was attended by rectors. Rector of the University of Warsaw, Dr. Marcin Pałys noted that he welcomed the new algorithm. He commented that the previous algorithm rewarded massive scale education to a greater extent. "In many discussions at universities doubts have been expressed as to whether the quality of universities should be improved if it results in decreased revenues of universities. Now this problem has been resolved - it is no longer doubtful that it pays to invest in quality and not in forced attempts to accept as many students and doctoral students as possible" - said Pałys.

Rector of the Stanisław Staszic University of Applied Sciences in Piła, Prof. Donat Mierzejewski noted that the new algorithm is simple and transparent. Rector of Lodz University of Technology Sławomir Wiak, asked if he would reduce the number admissions, said: "I expect that I will accept better students".